Early studies led by HRI among inpatients being treated for PTSD suggest that a cognitive training program called Goal Management Training (GMT) helps to reduce symptoms common among people with PTSD, including difficulty with memory, attention, planning and organization. 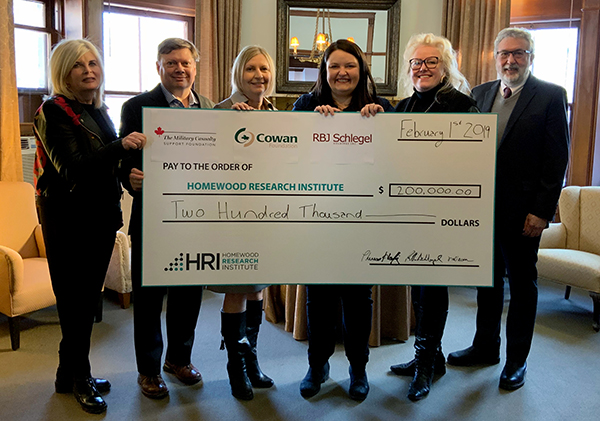 Thanks to a three-way funding partnership between the Military Casualty Support Foundation, The Cowan Foundation, and RBJ Schlegel Holdings, research will now be expanded to two outpatient clinics in Ontario to evaluate the utility of GMT among military members and veterans with PTSD.

Dr. Margaret McKinnon is Homewood Research Chair in Mental Health and Trauma and the principal investigator behind the GMT studies. She hopes to replicate early findings from inpatient studies among outpatient groups. Her team will evaluate the impact of GMT in the military population at Operational Stress Injury clinics in both Toronto and London.

The introduction of GMT among military professionals is timely: Veterans Affairs Canada reports that nearly 20,000 veterans and armed forces members have now been diagnosed with PTSD.1

On February 8, McMaster University announced that Dr. McKinnon was also the recipient of a one-year $150,000 grant from the Canadian Institutes of Health Research (CIHR). McKinnon is one of 22 researchers to receive funding to support the advancement of research that will help people with post-traumatic stress injuries.

Importantly, Dr. McKinnon will focus her studies on public safety personnel – including paramedics, correctional workers, police officers and firefighters – who are frequently exposed to traumatic events that increase their risk of developing post-traumatic stress injuries. A randomized control trial will explore how GMT can benefit public safety workers with PTSD and co-morbid conditions.